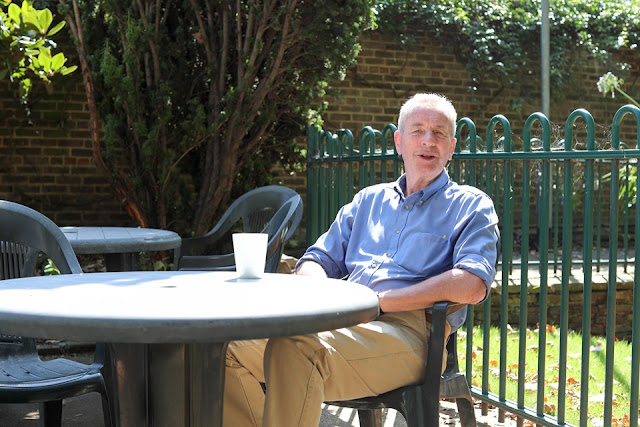 “It was the shortest day of the year: December 21st, 1987. I’d stepped out of the office to go on my lunchtime run. I was jogging along the river– just a few hundred meters from this spot– and I noticed somebody pointing into the water. There was a man out there. He’d jumped off the Waterloo bridge. I could see him in the middle of the river, waving his arms. Now I’m a total sissy when it comes to the water. When I go to the beach, I don’t just race into the sea. I go inch-by-inch. Like a sissy. But on this day I took off my shoes and leapt into the river. It was a very high wall, and the whole way down I’m thinking: ‘Shit this is going to be cold.’ But as soon as I hit the water, I got my mind on the job. I swam 50 yards until I reached the man. By that time he was unconscious, but I pulled him toward the shore. A police boat arrived and hauled us out with ropes. They took me to the station, filed a report, gave me some old clothes, and sent me on my way. There were no newspaper articles. No interviews. I told nobody except for my boss, because I had to explain why I was late for my 2:45 meeting. But I did get one little thing. Hanging in my home, at the top of the staircase, there’s a certificate from the police commissioner. It says: ‘Gallantry Award: Rescued A Drowning Man From The River Thames.”
(London, England)
Tweet
Share
Pin
Share
0 Shares