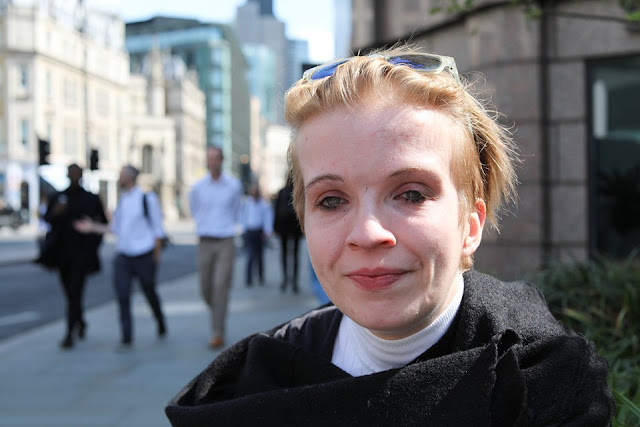 “Dad died a month ago. It’s been strange living without him. He was a strong Northern Ireland man. He worked as a busker in Waterloo, near the river. He only ever played old rock like The Kinks. He didn’t like authority— things like police and that lot. He was smaller than me, but that didn’t matter. He once fought half a police force by himself when they tried to take my older sister. He barricaded the house and took them on one by one. We lived in a nitty-gritty council estate in Southeast London. It was basically the ghetto. Lots of fights at my school. Lots of knife violence. Down to the point where sometimes the roads would be barricaded. Dad wanted to toughen us up. Mum was gone, and he knew nothing about being female, so he just focused on my character. We’d practice martial arts in the hallway. He’d slap me around like an older brother. I became pretty butch. I’d get in fights with men. I was quite angry. Being so poor and all. And I’m still quite angry— but I don’t show it much. I repress a lot. I took care of him until the end. He died in my arms. He was my rock. I’m feeling so lost but I’m keeping it in. If I fall apart, so many things will fall through. I’m in a lot of debt to the government. I’m trying to hold on to our apartment. I’ve got to find strength to deal with me own problems: money, government, paperwork. I can’t lose my patience and lose my job. But maybe if I’m ever done with everything, then I can have a little breakdown.”
(London, England)
Tweet
Share
Pin
Share
0 Shares